How Community-Scale Solar Can Change Our Energy System

Where and how we source our energy has a huge impact on our lives, from the food we eat to the air we breathe, which is why a shift to renewable energy is crucial. From rooftop solar arrays to large utility-scale solar farms, solar energy is helping us move toward a cleaner energy future.

Rooftop solar is an example of “distributed” solar. Such residential or small commercial solar systems are connected “behind the meter” (energy is used directly on-site), and since the electricity is produced close to where it’s needed, it reduces the amount of energy lost in transmission and distribution. It also decentralizes the grid, making it more reliable and resilient. On the other hand, utility-scale solar has the benefit of economies of scale, with Forbes reporting that recent bids have come in cheaper than coal and gas. These large solar farms can be up to 100 megawatts, covering up to 400 acres of land. They are usually owned by the electric utility company or a wholesale utility buyer, are connected at the transmission grid, and the electricity is delivered to the utility’s residential, commercial, and industrial customers.

While both of those market segments—residential solar and utility-scale solar—play a large role in a renewable future, there’s also a sweet spot in between those two. Community-scale solar consists of mid-size solar arrays connected to the distribution grid, and it has huge potential to reach millions of U.S. customers. Community-scale solar has many of the benefits of distributed behind-the-meter solar while also capturing the economies of scale of larger solar farms.

There are many other benefits of community solar as well. It allows people who cannot put solar on their roof (due to renting, shading, etc.) to access the benefits of solar energy. It also delivers multiple local economic benefits: additional property tax that goes to the local community, direct and indirect local jobs, and it helps keep energy prices stable and often cheaper for its customers than coal-fired electricity.

Many smaller municipal utilities and cooperatives, especially ones that serve rural areas, are not large enough to contract for utility-scale solar or do not have the capacity to integrate utility-scale generation into their distribution substations. But they may have adequate demand to incorporate community-scale solar, and many of their substations are large enough to accommodate these smaller installations. However, it can still be tricky to get a community solar array financed and built. But, adds Brehm, “If you have a large user who agrees to purchase the power, that helps projects get built.”

That is exactly what happened with the Upper Midwest Municipal Energy Group (UMMEG), a joint-action agency representing 15 electricity providers from Wisconsin, Iowa, and Minnesota.

Our energy use is not only related to how we power our homes and drive our cars; it’s also related to the food we eat. Food production creates a lot of carbon emissions, from the chemicals used to control pests and weeds to the energy used to produce, package, and transport the final product. Organic Valley is turning that equation around by not only sourcing food from organic farmers, but also sourcing its energy from renewable sources.

By the end of 2019, Organic Valley’s Wisconsin-based facilities will be 100 percent renewably powered through a combination of its existing wind and solar power and a new community solar project coming online this summer. This most recent project includes 12.6 megawatts (MW) of solar across three installations in Wisconsin and Minnesota, producing an equivalent amount of electricity used by almost 2,000 Wisconsin homes. The new, locally based source of electricity will benefit the three communities in which those arrays are located, along with three other rural communities that purchase their energy from the same utility. In short, this new community-scale solar project means nearly 10,000 rural and small-town residents and businesses in southwest Wisconsin and southeast Minnesota will benefit from stable and low electricity rates and the environmental benefits of solar energy. 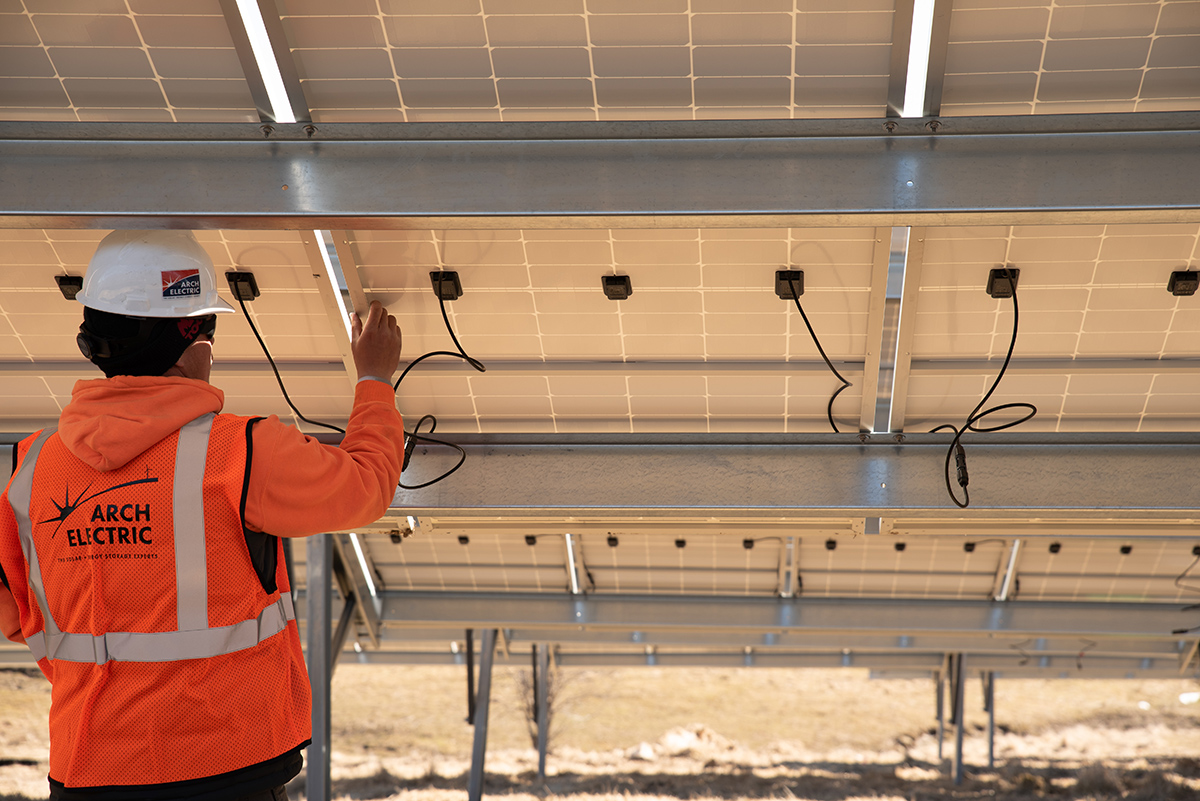 An additional 19 MW will be built because other organizations, such as Dr. Bronner’s and the City of Madison, agreed to buy renewable energy credits (RECs) from other UMMEG solar projects. The total 31 MW of new solar being added in 2019 will increase the amount of solar in the state of Wisconsin by 33 percent and benefit 23,000 people.

Besides more reliable and cheaper electricity, these solar projects will also bring jobs. “Meaningful and good-paying jobs just don’t fall from the sky,” says Stanley Minnick, energy services manager for Organic Valley. “These projects, and others like them, create regular and meaningful work for dozens and dozens of solar professionals, like the hard-working folks from Arch Electric based out of Plymouth, Wisconsin. The people who brave the elements to bring these projects to life are putting food on their families’ tables, sending their kids to college, and changing the world at the same time. Providing an opportunity for others to join the renewable energy industry is an essential part of why partnerships like the Organic Valley Community Solar Project matter.”

Mickella Geary, public affairs coordinator for Organic Valley, lives in Viola, one of the communities purchasing energy from the solar arrays. Viola, a rural town of 700 people, was devastated by flooding last fall. “As our community deals with the impacts and cleanup of a 500-year flood, this solar project is something positive to look forward to,” says Geary. While her energy costs may decrease having her town partially powered by renewables, the more important aspect for Geary, who saw houses and businesses destroyed by flooding, is that “people are talking about things that haven’t been spoken about in our small communities before, like renewable energy. This project is allowing people to look more optimistically on our community and can lead to more positive things.”

Organic Valley is a founding member of the Climate Collaborative, a group of 133 natural and organic food companies committed to reversing climate change. These large energy users can play an important part by motivating their utilities to pursue renewable energy.

“We were looking at doing the right thing with the right partners in a way that wouldn’t require upfront capital,” says Minnick. “To say that it worked would be an understatement.”

Organic Valley worked with solar developer OneEnergy Renewables (both members of RMI’s Business Renewables Center) and UMMEG to get the multiple solar projects built. OneEnergy built the arrays; UMMEG—representing 15 utilities in the tri-state area—buys the electricity from OneEnergy and provides it to Organic Valley and the local communities; and Organic Valley buys all the renewable energy credits (RECs) from the solar arrays, which helps support the project and keep prices low for all customers. 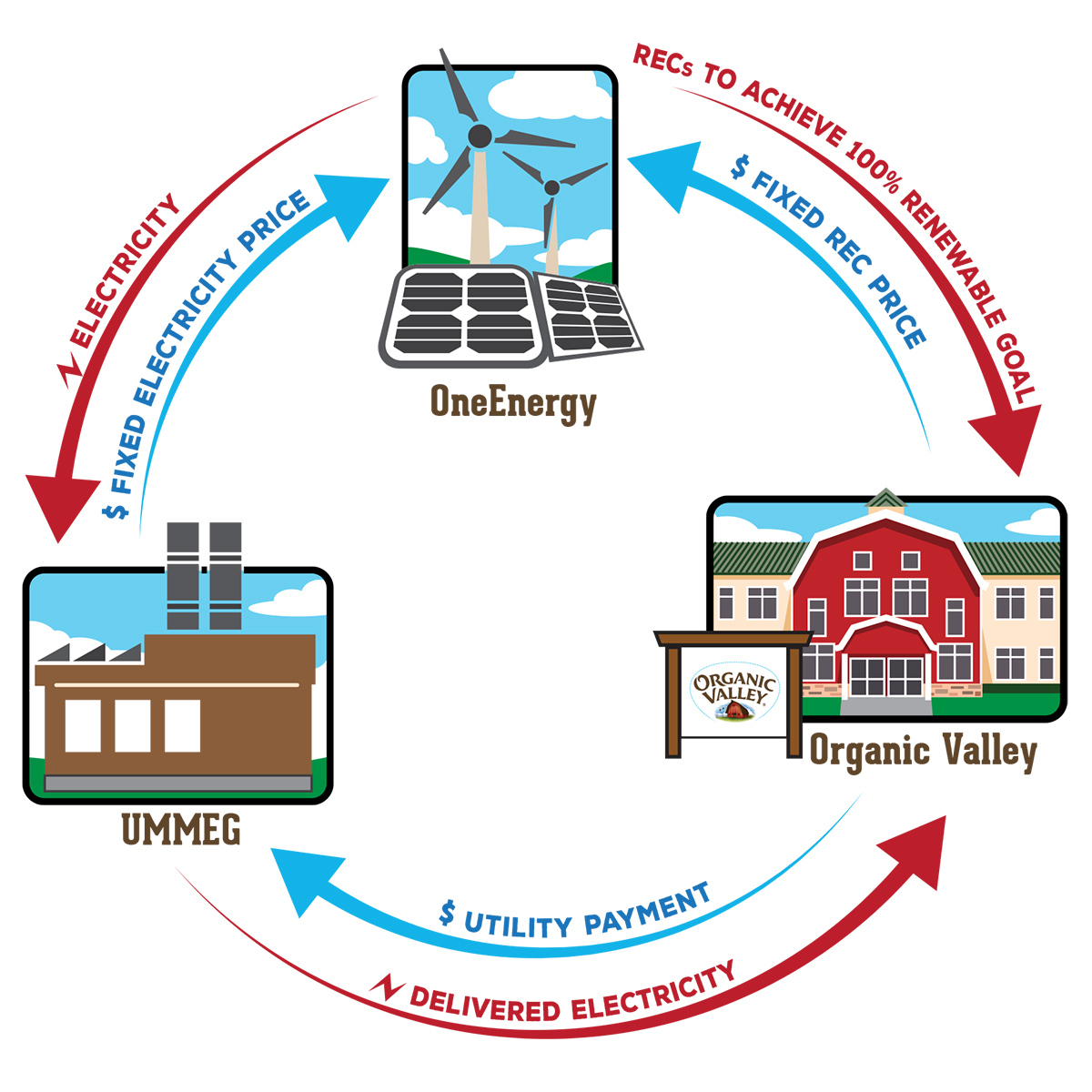 This cycle shows the movement of payments and services between the three partners in the Organic Valley Community Solar Project.

Having Organic Valley agree to purchase the RECs was key to getting these projects built. “It wouldn’t be viable for many of these small communities to finance their own projects,” says Minnick. “For Organic Valley, we were motivated to find projects that really supported these communities and fit their wholesale power needs.”

It’s a win-win-win situation: UMMEG provides clean energy that its customers want, Organic Valley reaches its 100 percent renewable electricity commitment, and local rural communities receive reliable and lower-cost renewable power. (And as an environmental bonus, the projects will incorporate pollinator-friendly landscaping or pasture for grazing instead of heat-reflecting gravel or bare earth.)

In addition to these wins, community-scale solar projects do much more than support the businesses and communities involved. “One of the biggest parts of [Organic Valley’s] mission is not only caring for the people and farms we work with, but also caring for our planet,” says Geary. “This solar project is doing good for both our people and the planet.”

Minnick adds, “Our farmers, our members, and the more than 20,000 folks in these communities all get to share in this story. We’re proud of the impact we’ve made in the Midwest, but we hope to see more of these types of projects across the country.”